In the Grieve 2017 Anthology, Donni Hakanson’s following piece won the Hunter Institute of Mental Health award. She has a lived experience with the loss of her son to suicide in 2016 and finds the processes of creative writing, photography and digital art cathartic and beautiful. She is also the web designer for Grief Journeys.

Entries for this year’s anthology is now open until the 28th of May 2018. Find out more here.

The following creative writing piece is about processing common themes specific to loss by suicide.  It may trigger some intense feelings – it also has a happy ending.

The Ghost of a Mother 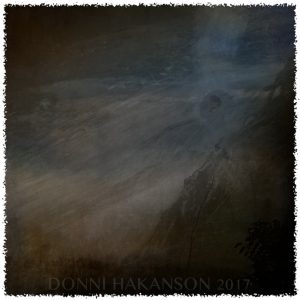 When he took his life, his mother became a ghost.

The gift of life she gave was worthless, thrown away, discarded with only a clammy corpse, blotched and defrosting in a funeral parlor her last goodbye. “Wake up, this is only a dream” his favourite shirt read. Later, in her hands, a box of ashes that weighed less than half his birth weight and a bill more than twice what the midwife had charged. It didn’t seem fair.

Her womb, spectral and rattling in the ribcage that is her home, haunted her with loss. If only it had been as barren as her desert heart had become. Wept futility furrowing a face that might smile in an upturn of lips that rarely reached her eyes. The only place she could scream was where the surf roared and drowned her in its endlessness. An eternity of broken gaped, too many pieces are shattered now. Too many pieces lost now. She is only part of a woman now, never whole.

Self-recrimination judge and jury, she finds herself lacking. Terminally. She knew he was troubled; thinking there was more time isn’t the same as having it. Why didn’t she?

And why didn’t he?

Why didn’t anyone else?

Regret. So much regret. Hindsight is perfect when one is blind.

The ghost of the mother is a map with no latitude or longitude, a circumference of hollow hopelessness, lost and aimless.

The ghost of a mother is a calendar, with birthdays and Christmas, with every full moon, every twenty-third of the month and every cry of a curlew marking pain. The ghost of a mother cries at the baked beans and the soya milk and the sultanas in the grocery store; and she curls his shirt in the nook beneath her chin, sniffing deeply.

Yet glimmers of wonder emerge, snippets of joy in angel clouds and rainbows and little birds and feathers and the kindness of others. That dream where he hugged her — and to keep him in her arms longer she turned it into a waltz and that holding of him danced in her soul, sustaining her a while. There are smiles that reach her eyes with a grandchild who cracks her open to let the light in and there are those who mention his name still. Momentary marvels break the monotony of empty, yet they pass by becoming touchstones of hope; what lasts is grief and there is no antidote just a growing around the empty places as time creeps by. It’s the aching of atoms for his presence; the lesson is learning to endure.

After the dark night, each dawn is so bright her heart bleeds with it, and she is uplifted and painted in crimson; and so, the ghost of a mother lives the cliché of renewal day by day. 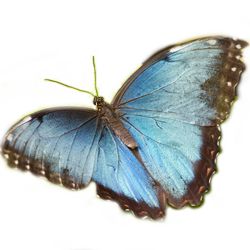 Be notified of workshops & events 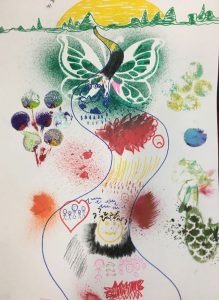 Artwork by participant at a Grief Journeys workshop, 2017.